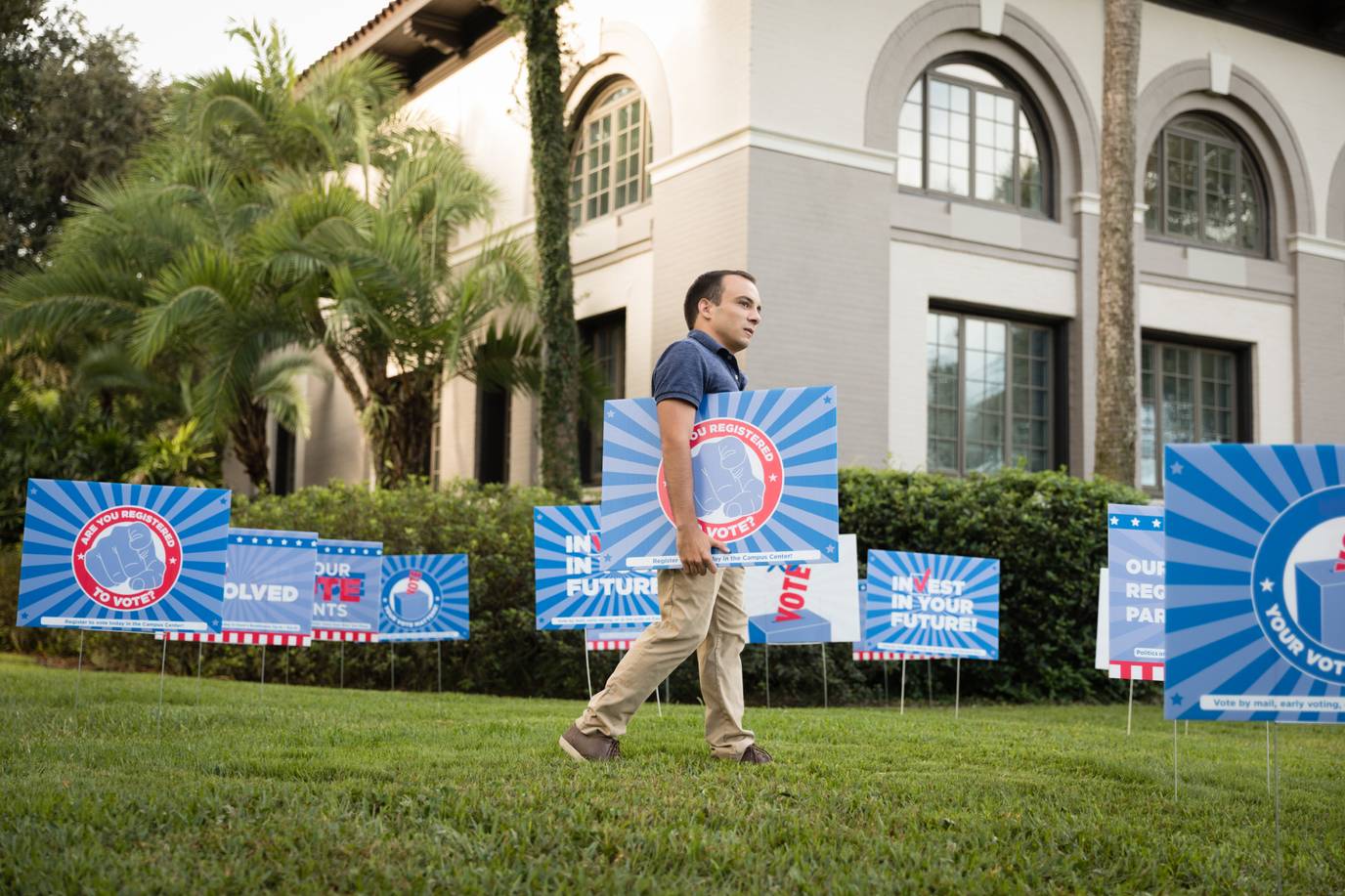 The College has been recognized as a national leader in engaging students in democracy for a third consecutive year.

For the third straight year, Rollins has been named a voter-friendly campus by a pair of national nonpartisan organizations. The College was one of just 124 universities in the nation to receive the designation for 2019–2020.

The Voter Friendly Campus initiative, led by Campus Vote Project and Student Affairs Administrators in Higher Education (NASPA), holds participating institutions accountable for planning and implementing practices that encourage students to register and vote in the 2018 elections and beyond. Its mission is to bolster efforts that help students overcome barriers to participating in the political process.

Rollins was evaluated based on a campus action plan to engage student voters in 2018 and how the College facilitated democratic engagement efforts on campus. The Rollins College Democracy Project, a student-led civic engagement initiative, created a strategic road map to engage students in the electoral process.

“A big piece of this year’s action plan involved targeting specific majors that didn’t turn out to vote in as high of numbers in the 2016 elections,” says Bailey Clark, associate director of the Center for Leadership & Community Engagement. “We catered our programming to attract students who were less likely to be engaged.”

The Democracy Project partnered with the Orange County Supervisor of Elections and League of Women Voters to organize 20 voter registration drives on campus and collaborated with the College’s Office of Residential Life & Explorations to register students and stage voting simulations in first-year residence halls. More than 250 Rollins students either registered for the first time or changed their voting address to the College.

The Democracy Project’s plan also created spaces for political discourse. It hosted a pair of meet-and-greet events with U.S. Rep. Stephanie Murphy and Mike Miller, the Republican challenger for Murphy’s U.S. House District 7 seat, and held three Politics on Tap events, which allowed nearly 100 students to discuss current events and policy issues under the guidance of a Rollins professor.

“Receiving this designation for a third consecutive year is singular proof of Rollins’ commitment to civic engagement and offering an education of and for global citizens and responsible leaders,” says Rollins President Grant Cornwell. “The meaningful work of the Democracy Project is a prime example of our students’ capacity to inspire action in our democracy and cultivate positive social change.”