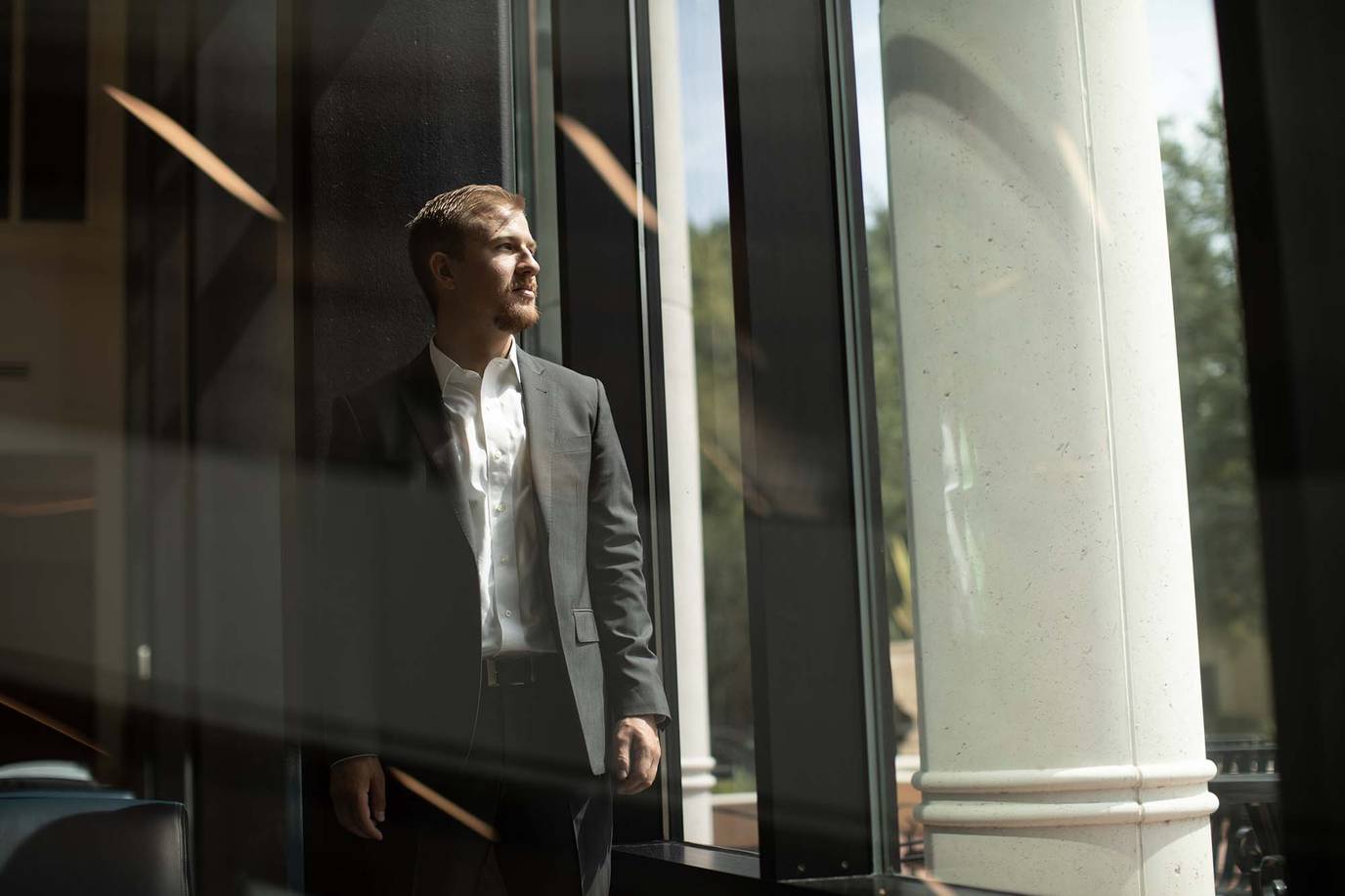 Combining a ferocious inner drive with an experiential Rollins education, Caleb Archuleta ’18 stands on the precipice of a promising career in service to his country.

Dive deep enough into conversation with Caleb Archuleta ’18—beyond the small talk and boyhood tales of outdoor adventure in the Pacific Northwest—and a defining character trait begins to take focus: He’s one of those “pain is weakness leaving the body” type of guys.

Not the kind who shouts it in your face like an angry drill instructor. But someone whose idea of fun is a 10K ocean swim, a half-Ironman, or a 24-hour, 40-mile Special Ops endurance challenge through some godforsaken muddy backwoods.

“I like to throw myself into whatever hurts,” says Archuleta, laughing. “Having this inner drive and knowing that when stuff hits the fan I can keep on going—that’s very important to who I am.”

An international business major who minored in Middle Eastern & North African Studies, Archuleta came to Rollins from Portland, Oregon, on a full-ride Alfond Scholarship. As a junior, he spent a year in Morocco studying Arabic and researching U.S. national security interests, which helped form the basis of his Honors Program thesis, “Counter-Improvements to U.S. Counter Insurgency in the Western Sahel.”

Having completed internships at Boeing, aerospace and defense firm Orbital ATK, and e-learning company BlueVolt, Archuleta is well equipped for life after graduation. As a 2019 Fulbright Scholar, he spent the past year studying international security at the University of Bristol.

Why continually push yourself to the limits of mental and physical exhaustion? “I admire a lot of great individuals and have read a lot of military history about people who served their country and give their all. Whether it’s CEOs or civil rights activists, they’re used to adversity. And I’ve tried to throw myself into any type of situation where I can prove to myself that when the body and mind get weary and weak, I can manage to overcome.”

What are your career ambitions? “Definitely to serve my country in some sense. I’d like to apply to officer candidate school in a year or so.”

Tell us more about your time in Morocco. “I spent my whole junior year there on the Boren Scholarship, researching economic development and the hashish trade in northern Morocco. I also went down to Western Sahara and spent time living out in a village in the middle of nowhere. I got to study with American professors and even joined a Moroccan swim team. Some nights, when I was in the mountain town of Ifrane, I’d pack up my rug and go out in the wilderness by myself.”

You had scholarships at Vanderbilt and the University of Southern California, among others. Why choose Rollins? “I spent a weekend on campus my senior year, and the hospitality was on full display. I practiced with the debate team, met a professor and career advisor, took a nap in the pillow room, worked out in the gym, and got invited to dinner on Park Avenue. We tend to underestimate how important community is to our daily lives and how enjoyable that makes things, but when you walk across campus and encounter 15 to 20 people you know—the human connection here is very strong.”

What kind of relationships were you able to build with professors? “I came to Florida from all the way across the country, so it’s been nice to have a support network. The professors here have been absolutely incredible at taking care of me personally, professionally, and academically. I’ll sit in Dr. [Richard] Lewin’s office and learn how rain in Houston is going to impact oil prices in Maine. We’re going skeet shooting next weekend. He’s been very influential in my development, as has Dr. [Rachel] Newcomb, who was instrumental in getting me to Morocco. And Dr. [Jayashree] Shivamoggi in the Office of External & Competitive Scholarships—she’s hands down one of the best people I’ve ever worked with.”

You’re one of the first graduates who went through the Rollins Foundations in the Liberal Arts general-education curriculum. What was that experience like? “It helped me find different interests—subjects like the philosophy of science and major crimes in the 20th century. It’s nice to go into a class where you’re way out of your element, pushing your weaknesses to become strengths.”

How has Rollins prepared you for success across a range of disciplines?“When I go out, I can converse with anybody on almost any subject. When I’m on the job, I can talk engineering with the guys at Boeing or strategic initiatives with U.S. embassy officials in Morocco. I can talk finance with analysts in New York or social justice and current events during a business meeting in D.C. It makes me a more effective individual and a better team player.”

What does being an Alfond Scholar mean to you? “It’s hard to overstate how much the belief of an institution means to me. When they say, ‘Hey, we want you to represent Rollins College,’ it makes you step up to the plate. I have this sense of appreciation and try to pay it forward every day. In this program, I got to hang around good people who became some of my closest friends.”

What advice do you have for incoming first-year students? “Chase down the best and brightest you know, and learn from great mentors. People are what’s important—the most valuable resource we have. You never know how much you can learn from everyone around you.”

How will you remember Rollins? “As a college that produces very happy graduates because people are pursuing what they love. Rollins has been a fantastic place to chase my dreams.”