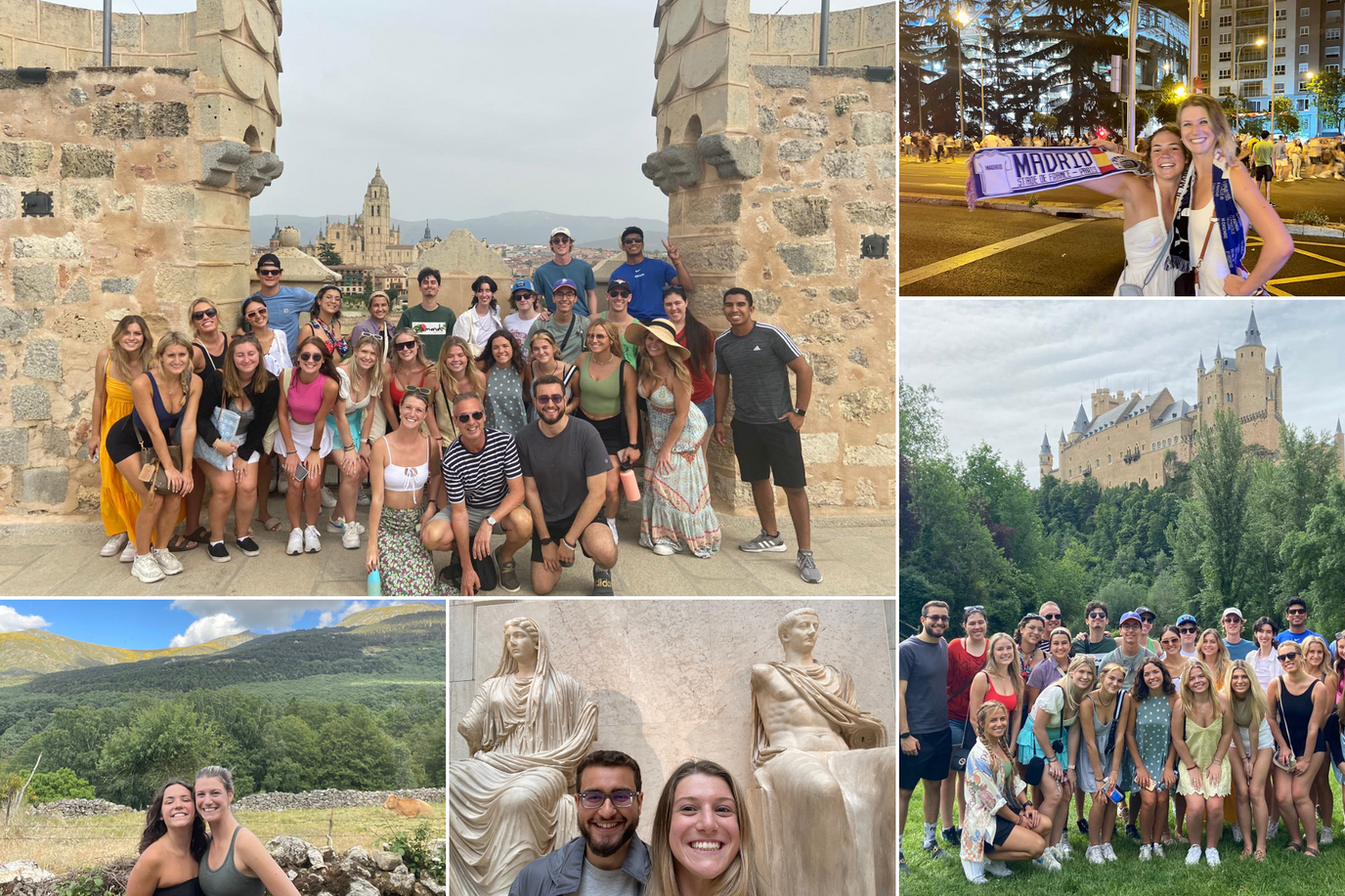 For more than 60 years, students studying Spanish at Rollins have had an opportunity to spend their summers in Madrid, Spain, experiencing Spanish culture and engaging in intensive language courses. Led by Spanish professor Alberto Prieto-Calixto, the Verano Español program has evolved in the decades since its inception. The latest version is a partnership between Rollins and the don Quijote Language School located in the heart of Spain’s capital city.

The immersive, eight-credit-hour, six-week-long program offers students a blend of culture, history, and language instruction with a healthy dose of adventure. Just ask international relations major, Spanish minor, and 3/2 Accelerated Management Program student Bridget Collis ’23 ’24MBA, who joined the program this year as a student site leader. She shares her experience of mentoring her fellow students and explains how getting to participate in the program was a dream years in the making.

I knew I wanted to study abroad even before I came to Rollins. In fact, that’s how I started my college career—by going on the First Year Costa Rica Field Study, where I got to learn about ecotourism, sustainability, and local culture as I hiked through the Monteverde Cloud Forest. This experience helped form the basis for so many positive relationships that carried on through my time at Rollins, from getting to bond with environmental studies professor Barry Allen, my faculty advisor and Rollins College Conference (RCC) professor, to making connections with other students before setting foot on campus. The field study focused on conservation and the role of national parks in preserving our world’s wild spaces, but it also gave me an opportunity to brush up on my Spanish. Even though I’d spent time in Costa Rica as a child, it was gratifying to see the country through a new lens.

Inspired by my time in Costa Rica, I knew I wanted to once again venture beyond the bounds of campus. I had my eye on the Verano Español program because it would allow me to dig deeper into my Spanish minor and it was so immersive. I was originally supposed to join the program as a student in 2020 and then again as a site leader in 2021. Both times, I went through the orientation and training process, and both times the program got shut down due to COVID-19 travel restrictions. I guess the third time really is the charm because this year, it finally happened! All the extra preparation was really beneficial to me and to the students I was able to mentor along the way.

Verano Español is different from other Spanish language study abroad programs that you might find outside of Rollins. First, it’s pretty historical. The program has been in operation since 1960—that’s longer than zip codes have existed. And for the last 23 years, it’s been facilitated by Spanish professor Alberto Prieto-Calixto, who brings a ton of passion and knowledge to the experience.

In traditional study abroad models, students travel and study independently, but through Verano Español, you’re traveling, learning, and exploring Spain with a professor you’re familiar with and who’s an expert on the subject. Most of us came to the program after taking at least one class with Professor Prieto-Calixto, and being able to connect with a mentor outside of the classroom like that is really unique. He prioritizes student involvement and immersion, and in addition to being a phenomenal Spanish instructor, he knows a ton about Spanish culture and society. Having him lead us around the city and on weekend excursions really enriched the experience.

Another interesting thing about the program is that it’s suitable for students at all levels of proficiency, so whether you’re just starting to learn Spanish or are a more experienced speaker, you can reap the benefits of surrounding yourself with Spanish culture and spending a summer around native speakers. This year we had a nice mix—the more experienced speakers were able to support the students who had a little more of a learning curve, and regardless of ability, it was so cool to see folks making strides in real time.

Despite the rigor of the classroom component, we still had plenty of time to explore the rich culture of Madrid and fall into the rhythm of the city. Since we were in the country’s capital and the most populous city, we didn’t have to venture far to find incredible food, shopping, architecture, and green space. The don Quijote campus and dormitories are located near Spanish Parliament and the Museo del Prado, Spain’s national art museum. And Madrid hosts three professional soccer clubs, so we could pretty much catch a game whenever we wanted. By the end of the program, several of us had become regulars at some of the local cafes to the point where the baristas knew our names.

One of the biggest highlights was our weekend excursion to Candelario, a small mountain town in the Salamanca region of western Spain. It’s much more rural than Madrid, which I enjoyed because I love to hike and recharge in nature. That experience offered us a glimpse into Spanish life outside of more urban tourist destinations and allowed us to embed with a close-knit community of people who were eager to share their culture with us.

This trip was a long time in the making and more than exceeded my expectations. As someone who hopes to pursue a career in finance and economics after I graduate with my MBA next year, my time in Spain helped deepen my understanding of how interconnected the global economy is and how it affects everything from the rate of the U.S. dollar to wealth management and the stock market. It definitely boosted my confidence in my ability to facilitate international business transactions, whether it be in Spanish-speaking countries or elsewhere in the world.

See how your future classmates are putting their Rollins education to work all around the globe.