What It’s Like to … Perform on the Silver Screen 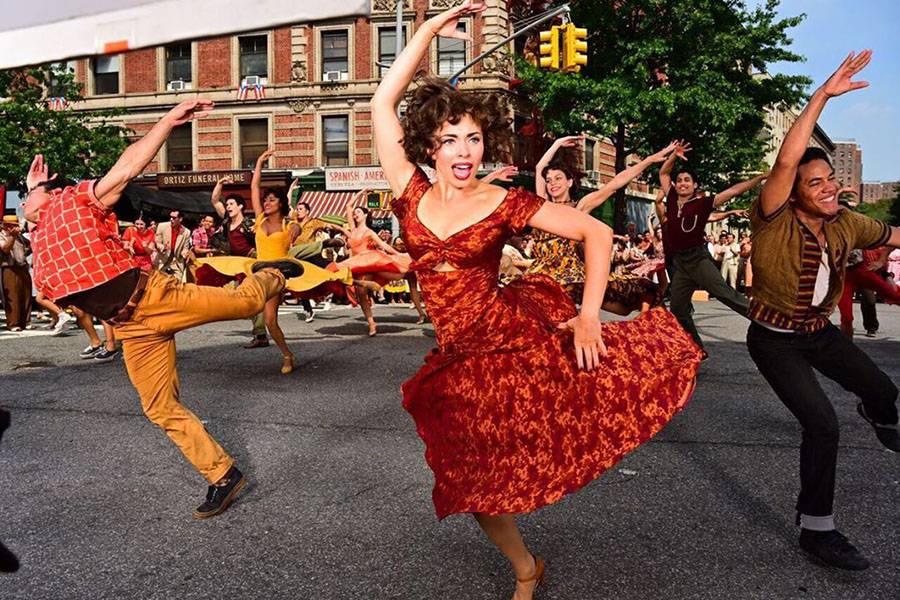 Isabella Ward ’15 recently made her big-screen debut in the Golden Globe-winning West Side Story revival, and now she’s reflecting on her path to the spotlight.

For Isabella Ward ’15, every perceived setback provides a doorway to opportunity. The theatre and international business double major came to Rollins with dreams of dancing for the Orlando Ballet. An injury freed up time instead to focus on acting and singing, which led to a master’s in musical theatre from the Royal Conservatoire of Scotland. After joining the national Broadway tour of Rodgers and Hammerstein’s Cinderella, she fell during auditions for Steven Spielberg’s West Side Story before flying to Puerto Rico to try again—and landing the role of Tere. Ward shares what it was like to represent her Puerto Rican heritage in the iconic musical and reflects on how her Rollins professors boosted her confidence and helped her become fearless.

My first day on set for West Side Story, we went in for a wig fitting. I’ve always thought I look like my father, who’s American. But as soon as I put it on, I instantly looked like my grandmother on my mom’s side who grew up in Puerto Rico. We literally looked like twins. It was wild. Suddenly, I felt like I had this opportunity to embody her and her spirit.

She and my grandfather moved from Puerto Rico to Brooklyn in the 1950s, where they got married, she worked in a bra factory, and then they eventually moved back to Puerto Rico. So West Side Story is a story that’s very close to my heart.

But the opportunity almost didn’t happen.

The first time I auditioned was at the open call in New York. I woke up at 3 a.m. to head from Washington Heights to Brooklyn to stand in line. The line was a block down the street by the time I arrived, it was raining, and I didn’t get seen until 3 p.m. By the time we were actually auditioning, everyone was exhausted and frustrated, and the girl next to me kept getting so close and ended up kicking me in the face! I fell to the floor in defeat.

Not surprisingly, I didn’t get a call back. I could have given up, but my family was like, ‘They’re holding auditions in San Juan. You have to go and try again.’ So I booked a flight, danced my heart out, got noticed, and now the rest is part of Hollywood history.

I feel like perseverance is my through line of being part of this ensemble cast. During so many of the rehearsals, I felt like an imposter. Almost every other person on the film had been on Broadway. Up until that moment, I had only done a non-equity Broadway tour of Cinderella. Rehearsals were long days for three months before we even got on set, and the choreographer, Justin Peck, pushed us all so hard. I felt so challenged emotionally and physically every single day.

But then it dawned on me that my imposter syndrome was getting in the way of me actually doing what I loved to the best of my ability. I had to focus on remembering that we’re all humans. Even Steven Spielberg eats and sleeps. Justin Peck eats and sleeps the way we do. I had to remind myself that I was there for a reason, and I didn’t need the validation of other people. Once I was able to get in the right mindset, I had a great time.

Everyone was super supportive. All of the dancers became like a family by the end of it. And Steven Spielberg felt more like a supportive dad than a superstar director. He wanted us all to succeed, knew all of our names, and really went out of his way to make us all feel safe and comfortable. I love that for the Sharks, he made sure the casting was authentic, only hiring people from Latinx backgrounds.

Every Sunday, he and Kristy Krager, our amazing producer, would rent out a theater for us and choose films for us to watch that either they thought were important for us to know about or to inform us about the time period. It helped us create that authentic connection between castmates and the characters in the gangs, which made us all feel like we were in a master class.

It was like being back in classes again at Rollins—just on a bigger stage.

Growing up as a ballet dancer, I had a very strict schedule. I went to school until 3 p.m., then dance school until 11 p.m. My plan when I got to Rollins was to dance at the Orlando Ballet, do theatre, and a million different things. But then I got injured and couldn’t dance. Rollins gave me the opportunity to free up my soul to try things I wouldn’t have otherwise. I focused on acting and singing. I learned so much about improv from [theatre professor] David Charles, which was a huge part of my life at Rollins. It loosened me up. It gave me confidence. It taught me to run toward fear rather than away from it and made me the fearless person I consider myself to be today.

Music professor Richard Owens also changed my life. He was the one person who believed I could do anything. I couldn’t sing when I first met with him, and he told me, ‘We’re going to make you a singer.’ He passed away a few years ago, and I miss him so much. Without him, I wouldn’t have gotten to this moment.

So much of being in this industry is about advocating for yourself and putting yourself out there, even when it’s difficult. For example, this morning I learned we won a Golden Globe for Best Motion Picture for a Musical or Comedy. But this afternoon, I learned I didn’t get a part I was super excited about—it went to a known actress. Tomorrow, I’ll put myself back out there again, and hopefully one day I’ll land the role of Evita on Broadway or in a movie adaptation—or star in a female-led action film.

And when I do, it’ll be because of all the opportunities I’ve had and thanks to the support of my family, friends, and professors at Rollins who taught me that every opportunity is first and foremost a chance to learn.

West Side Story is set to start streaming on Disney+ and HBO Max March 2.