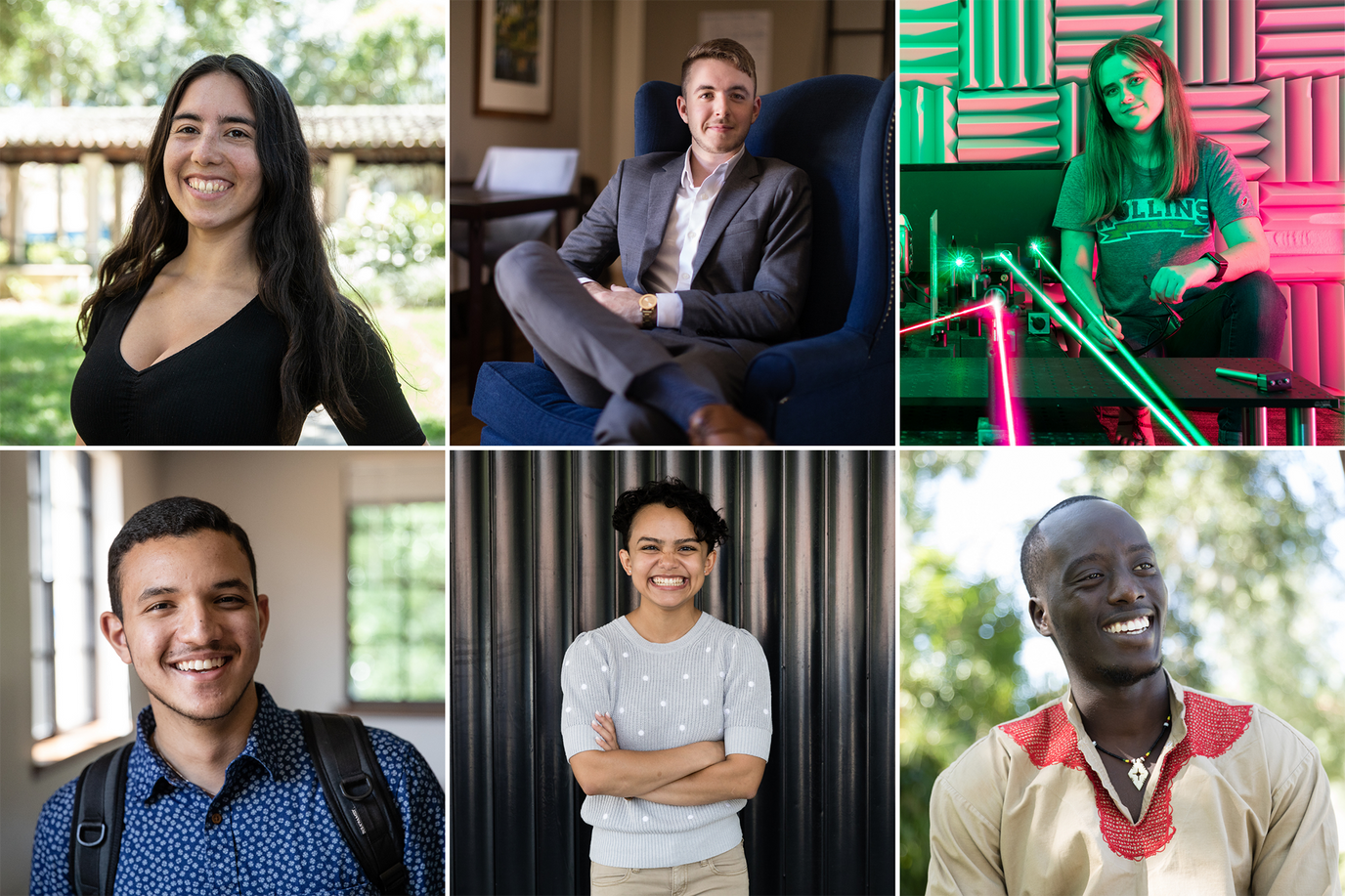 Rollins’ academic excellence combined with unmatched personalized attention prepares our students to land some of the world’s most competitive opportunities.

A Rollins education is about engaging instead of memorizing. It’s about applying knowledge instead of studying from afar. It’s about creating your own path instead of taking a number. The result is a rigorous academic foundation that creates critical thinkers, status-quo challengers, creative problem-solvers, and responsible leaders.

The path to prestige starts in Rollins’ intimate learning environment, where professors and faculty advisors know each of their students well beyond their declared major and where experts like Jayashree Shivamoggi—director of the Office of External & Competitive Scholarship Advisement—dole out the kind of one-on-one guidance and support that reflects the passions, dreams, abilities, and challenges of each student.

Rollins’ commitment to true mentorship, to rigorous learning both inside the classroom and out, and to shepherding students along on their own unique paths has empowered generations of Tars to pursue the world’s most prestigious scholarships. In the first half of this year alone, Rollins students and graduates have earned awards that reflect the College’s commitment to academic and athletic excellence, global citizenship and responsible leadership, science and service.

From the world’s premier scholarship for public service leadership to the top undergraduate science scholarship, take a closer look at the recent elite opportunities that are positioning Rollins students as the next generation of changemakers.

The Truman Scholarship is the latest in a string of awards that James has garnered since transferring to Rollins in 2017. It’s also the next step in a remarkable journey in which James has consistently defied the odds, rising from a Kenyan refugee camp to join the ranks of some of this country’s most powerful people.

In just two years at Rollins, James has traveled to Uganda to help South Sudanese refugees, worked on campus to advance the United Nations Sustainable Goals through the Millennium Fellowship, and studied abroad in Morocco, where he founded his Friends of Migrants and Refugees project to increase the engagement and acceptance of migrants, refugees, and immigrants within the North African nation.

Recipients of the Truman Scholarship receive a $30,000 scholarship toward graduate school and the opportunity to participate in professional development programming to help prepare them for careers in public service leadership.

Lauren Neldner ’20 has received a 2019 Goldwater Scholarship, the country’s most prestigious undergraduate science scholarship. The award, which was established by Congress in honor of the late Sen. Barry Goldwater, is given to sophomores and juniors who intend to pursue careers in mathematics, engineering, and the natural sciences. It covers the cost of tuition, fees, books, and room and board up to a maximum of $7,500 per year.

Neldner plans to pursue a PhD in either geophysics or structural engineering after graduating from Rollins. She based her Goldwater essay on her experience last summer in the prestigious IRIS Internship Program, a paid seismology research program funded by the National Science Foundation’s Research Experiences for Undergraduates initiative.

Neldner spent the majority of her internship at Brown University working on her own research project, which was focused on using ambient noise caused by ocean waves to learn more about the Earth’s crust and upper mantle under Alaska. Neldner felt right at home in the Ivy League lab, thanks to her uncommonly early research experience in Rollins’ Student-Faculty Collaborative Scholarship Program and Thomas Moore’s rigorous standards, both of which gave her a leg up even among a collection of the country’s top science students.

Colangelo and Roderick—the first U.S. military veteran from Rollins to receive the distinguished honor—will both teach English in Germany. Leeper, Khazzam, and Knight will teach English in Spain, Brazil, and Jordan, respectively.

With their career sights set on everything from foreign service to international law, Colangelo, Khazzam, Knight, Leeper, and Roderick will be the 44th, 45th, 46th, 47th, and 48th Tars to participate in the Fulbright Program since 2006. Rollins has been named a top producer of U.S. Fulbright scholars six times.

Carla Daza ’20 has been selected to attend the prestigious Junior Summer Institute in Public Policy and International Affairs (PPIA) at Carnegie Mellon University in Pittsburgh. Each year about 600 students apply for 100 spots in the PPIA program, the goal of which is to help students achieve a master’s degree in public policy, public administration, international affairs, or a related field.

The seven-week summer fellowship, which begins June 17, includes airfare, university housing, course materials, and the opportunity to learn from some of the nation’s brightest minds in policy analysis, economics, qualitative methods, and more.

Daza will join the first-ever data analytics track at Carnegie Mellon’s Heinz College, which is designed specifically to equip students with the skills needed to solve problems at the crossroads of people, policy, and technology. This opportunity is tailor-made for the tech-savvy activist who discovered her passion for data and social good at Rollins under the guidance of faculty mentors like computer science professors Dan Myers and Valerie Summet and through her internship at the nonprofit youth development agency Girls Group.

Alumni of the Junior Summer Institute not only join a network of nearly 4,000 leaders and gain access to mentoring and career development, but they also have the opportunity to receive financial support for graduate school. Post-Rollins Daza plans to pursue a master’s in public policy and management at Carnegie Mellon where she’ll specialize in data analytics.

Meghan Oxford ’20 has earned Campus Compact’s 2019 Newman Civic Fellowship, which recognizes and supports students committed to achieving social change. The one-year fellowship provides training and resources that nurture students’ passions to help them develop strategies and prepare them for the long-term work of public problem solving and building equitable communities.

Oxford’s first brush with the real impact of service came during her junior year of high school when she studied abroad as an exchange student in Peru and continued when she landed at Rollins in the Bonner Leaders Program. Through this service-focused cohort, she has served as the activities coordinator in the children’s wing at Florida Hospital and as a fieldwork and advocacy intern with Equality Florida, one of the country’s largest civil rights organizations for the LGBTQ population. It was here—working with public policy and organizing lobby days in Tallahassee—that her passion for service started taking a turn toward social justice.

The burgeoning advocate has since founded the Rollins Democrats Club alongside Mira Lines ’20 and Emma Thvedt ’20. Oxford will be spending part of her fellowship year interning in the nation’s capital through the Washington Semester Program at American University learning about foreign and domestic politics, law and jurisprudence, international business and trade, and economic policy.

Nuh Elalaoui ’21 is the first Rollins student to be awarded the Cultural Vistas Fellowship, a summer international internship program designed for underrepresented U.S. college students. He chose the consulting management track of the program and will spend eight weeks in Berlin interacting with local business leaders and analyzing business practices.

For more than 50 years, Cultural Vistas has been creating multinational professional development programs that promote global understanding through the lens of career exploration, civic engagement, leadership development, and professional training.

Germany won’t be new to Elalaoui. Last year, the Alfond Scholar participated in Sommer Deutschland, a Rollins summer program in Munster led by German professor Nancy Decker that provides Rollins students the opportunity to study German language and immerse themselves in the culture. Elalaoui is also enrolled in Rollins’ dual-degree program, which allows students to earn a BA in international business from Rollins and a BS in international management from Germany’s Reutlingen University.

As a Rollins student, Mooljee worked with students on the autism spectrum as part of the inaugural cohort of Bonner Leaders, the College’s service leadership scholarship program. She also served as president of Rollins’ Amnesty International chapter and interned at the American Red Cross in Washington, D.C.

Mooljee joined the Peace Corps after graduation and served for two years in the Dominican Republic. She was a trailblazer, becoming the first Peace Corps volunteer ever to serve in her community on the Dominican-Haitian border. She taught Spanish literacy to adults and children and worked with the Ministry of Education to improve monitoring and evaluation tools to help increase literacy in the region.

Mooljee will pursue graduate studies in humanitarian policy at Columbia University’s School of International and Public Affairs beginning this fall. Upon successful completion of the Payne Program and USAID entry requirements, she will receive an appointment to the USAID Foreign Service.

Jakobi Bonner ’20, a guard on the Rollins men’s basketball team, was selected to participate in the NCAA Student-Athlete Leadership Forum this past April. A proven leader both on and off the court, Bonner was one of only 300 student-athletes nationally to attend the highly selective forum. He was one of just three student-athletes chosen to represent the Sunshine State Conference, which is comprised of 11 institutions with an average of 400 student-athletes per institution.

The NCAA Student-Athlete Leadership Forum engages a diverse and dynamic representation of student-athletes, coaches, faculty, and administrators. Student-athletes selected to attend the forum return to campus with invaluable leadership skills, the experience of exploring the relationship between personal values, core beliefs and behavioral styles, and a thorough understanding of the NCAA as a whole.

Bonner has served as the captain of the men’s basketball team since his second year and is the team’s leading scorer and one of the top scorers in the conference. He is also a resident assistant in Rollins’ McKean Hall, where he focuses on promoting inclusion, respect, and tolerance, and is involved in the athletics department’s Captain’s Council, which seeks to unify individuals across different sports.

From workshops about preparing for grad school to mock classroom sessions with thought leaders like Marshall Ganz—who’s credited with devising the successful grassroots organizing model for Barack Obama’s winning 2008 campaign—Toppin learned about how to use her narrative to help spark social change.

Toppin credits Rollins’ tight-knit network for providing her with the resources and support to follow her passions and achieve success. Rollins, says Toppin, creates the kind of family environment that motivates students to persevere and pursue their dreams relentlessly. For Toppin, those dreams include fighting for women’s rights and the rights of women of color as well as working to end gender-based violence.