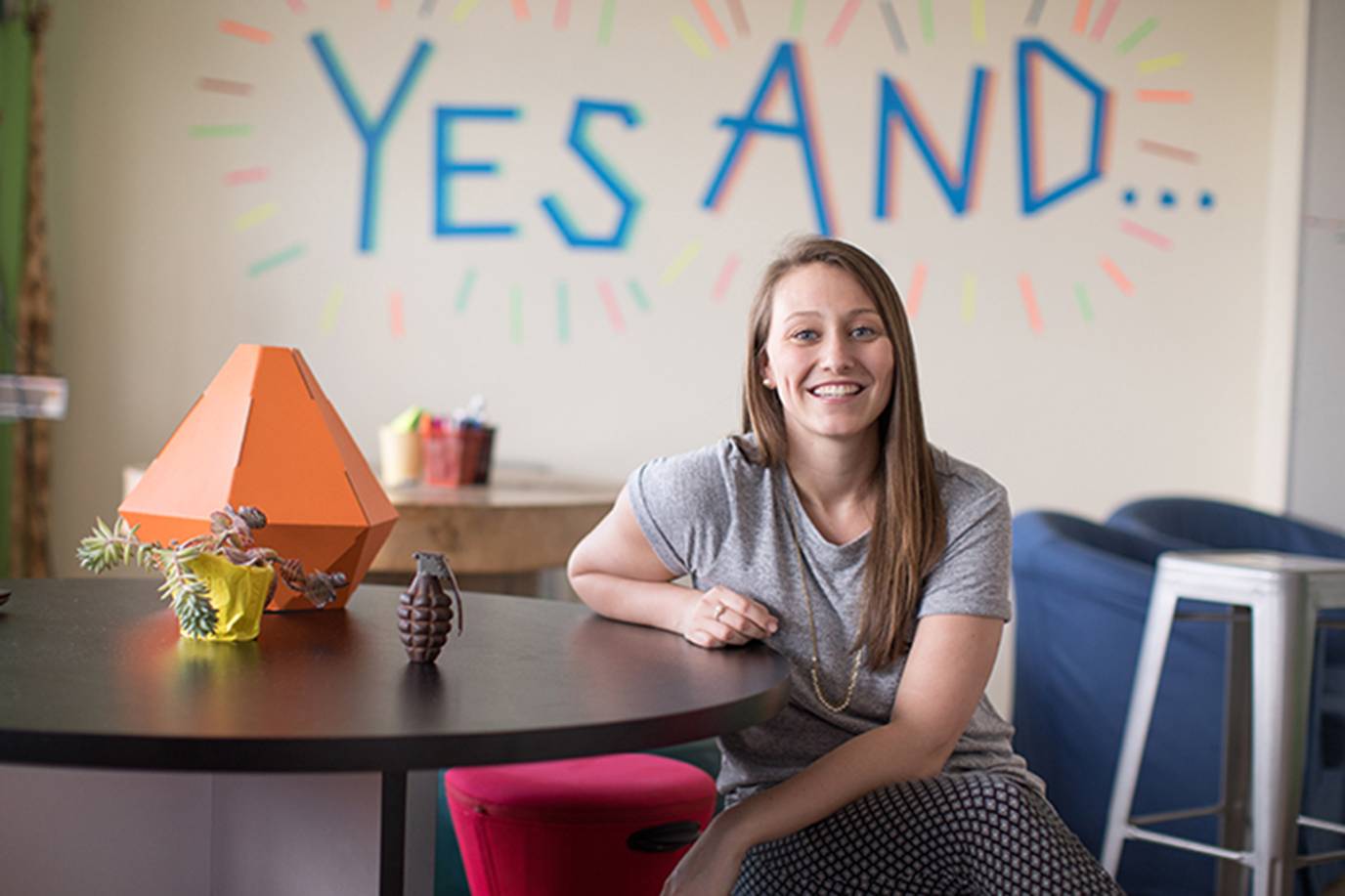 You wouldn’t know what Alexis Meeks ’16 does at AdventHealth by looking at her title: product manager for the Project Fulcrum Team. Her work is always changing, and that fits her perfectly.

The phone call came just as Alexis Meeks ’16 was leaving to visit her family in Illinois for Christmas in 2018. An AdventHealth colleague presented a proposal that went something like this: We have no clear job description, no pay structure, and don’t know what the work will be yet. So … do you want to join our team and help us figure it out?

“When I heard we’d behave like a startup with a team of four, creating disruption from within, I said, ‘I’m in.’”

Meeks was prepared for anything due in large part to her Rollins experience. A psychology major, she collaborated with students across disciplines like biology, economics, and computer science. Professors nudged her to extend herself, saying, “The job you’ll have 10 years from now probably doesn’t exist today.”

They were right. Meeks turned an internship she secured while at Rollins in AdventHealth’s newly formed Innovation Lab into her first job out of college. Her problem-solving skills in the Innovation Lab generated enough attention to land her the opportunity to join the all-new Project Fulcrum Team tasked with changing health care as we know it.

“Our first project was to connect all the pieces of a patient’s health journey via digital chat—appointments, lab tests, prescriptions, everything—so that the care is simpler.”

Less than a year after her team launched this service, 1,500 patients and 25 providers were using it. Meeks doesn’t know what her next project will be, but armed with her Rollins experience, she’s well prepared for the unknown.

From conducting original scholarly research as an undergrad to throwing herself into subjects outside her major, explore some of the transformative waypoints on Meeks’ personalized pathway through Rollins.

As a first-year student, Meeks didn’t know what she wanted to do for a career. “That’s OK,” she says, “because the classes that didn’t fit a specific field actually helped me find my way.” She remembers two in particular: Buddhist Philosophy and Zombies, Serial Killers and Madmen. She had little interest in either topic at first. “But classes like that taught me to simplify complex ideas, to communicate them clearly, and to understand how other people think. Those skills give you confidence when you head into unknown territory in life. That’s what we’re doing in most fields today, including health care.”

The concepts and collaboration began to gel the summer before Meeks’ junior year. That’s when she partnered with psychology professor Andrew Luchner on an original research project through Rollins’ Student-Faculty Collaborative Scholarship Program. She knew it would be a unique experience when Luchner asked, “So … what do you want to do?” Meeks had broken her leg during her first softball game her first year at college and fought to come back. “I wanted to do research on ‘perceived resilience.’ Dr. Luchner gave me guidance but also the flexibility to lead.” The finished paper would be published in the North American Journal of Psychology, with Meeks cited as the first author. “That was a turning point for me.”

Other doors opened wide as Meeks recovered from the broken leg. The time spent in rehab meant she had to make up classwork. Which also meant she spent a lot of time in her professors’ offices. “I’d literally go from door to door in the Bush Science Center, getting advice from all of them. They really cared about me as a person. I considered all of them mentors.” Those same professors recognized something else in Meeks. “They challenged me to step out and be a mentor for others, despite my perceived lack of time. That was incredibly valuable for my growth, professionally and personally.”

The interview for this story had to be rescheduled when Meeks was needed for a last-minute conference call—a taste of the shifting and adapting that comes with a catchall job title and an unknown tomorrow. “To me it’s exciting,” she says. “In a way it reminds me of Rollins, being on a small team with different interests—finance, biochemistry, human resources, the travel industry. Together, we’re doing things that have never been done.” In other words, the best gateway isn’t necessarily one that exists. It’s the one you create.