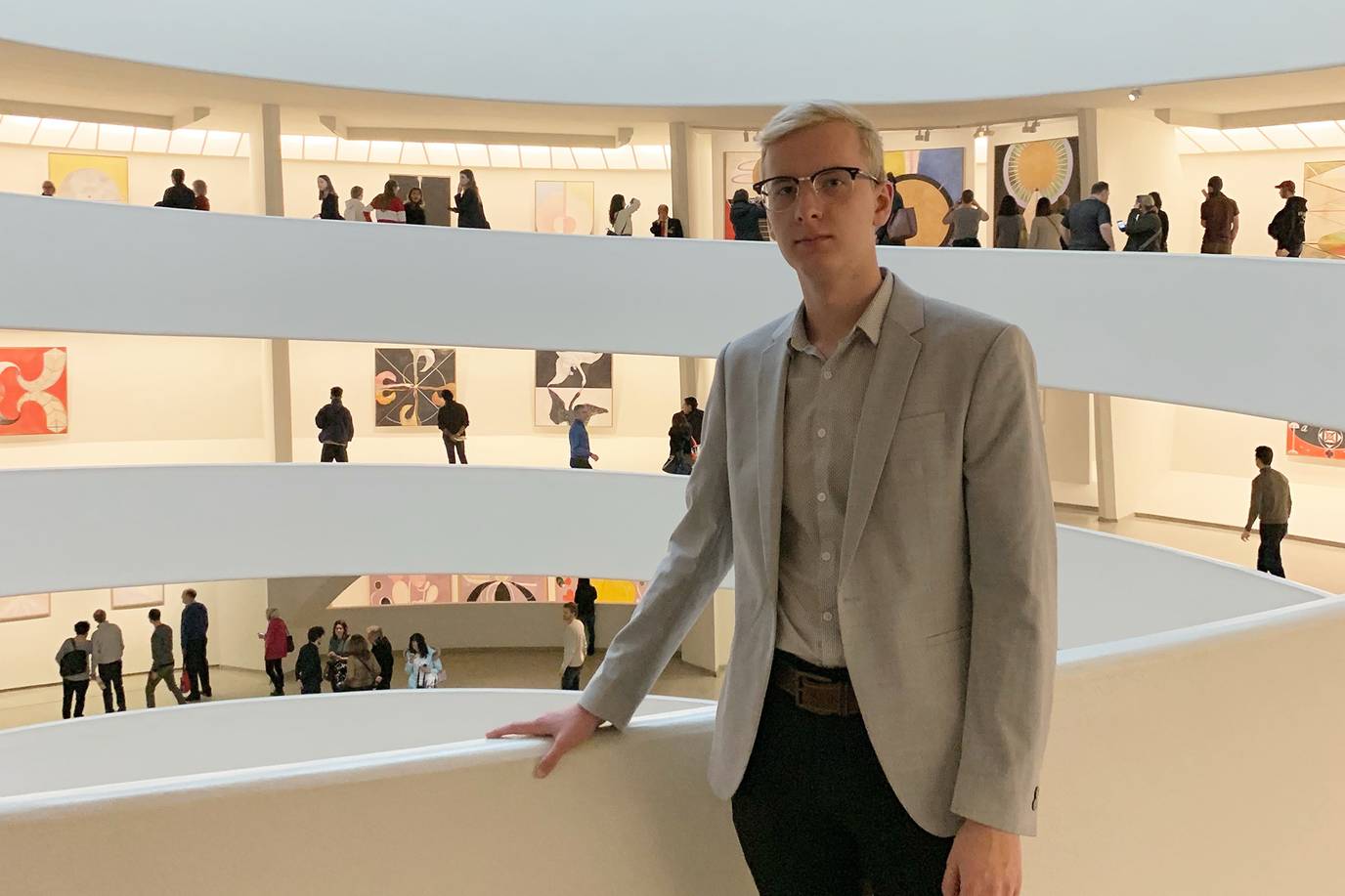 Isaac Gorres ’21 has long had a fascination with the natural world, and at Rollins, his interests have evolved into a perfect fusion of the left and right sides of the brain.

“I’ve always been super nerdy,” he says. “In elementary school, I would go out and find lichens and mosses, scrape them off trees, mix them with water, and look at them underneath the microscopes I got for Christmas. I was fascinated by how cool they looked, and that was probably my earliest foray into exploring.”

At Rollins, he blended his love of beauty and discovery with a double major in art history and biochemistry/molecular biology. He plans to translate both into a career as an art conservator or curator. His current status as a graduate student in environmental microbiology at Radboud University in the Netherlands may seem like a departure from that path. After all, as part of his program, he’s working to better understand whether the transformations that happen in industrial drinking filters made of sand are microbial or physical.

But if you take a closer look, his passion for art is not far away. He has applied for an advanced summer program at the University of Amsterdam that explores esotericism, gnosticism, art, and occultism, among other practices. And on the wall behind his desk are an array of colorful Post-it notes. On each is a different suggestion for an exhibition on the moon that he plans to pitch to Japanese billionaire Yusaku Maezawa, who will be taking eight visionary artists with him on a lunar flight in 2023.

“I want to take the artworks that come out of this experience, combine them with other pieces related to the moon, and curate them all together using the skills I gained at Rollins,” he says.

Gorres gained and sharpened these skills at every step of his journey as an undergrad in everything from his coursework and relationships with professors to studying abroad and conducting student-faculty research.

Gorres still recalls the skeptical looks he got during his high school graduation ceremony as he told people he planned to double major in biology and art history in college. But at Rollins, his courses and professors nourished his dual passions for science and art.

“One of the first classes I remember taking is The Art & Science of Cell Death,” he says. “It was co-taught by a biologist and a studio artist. We basically looked at dying cells under a microscope and created contemporary artworks from those findings. That was my earliest experience of actively fusing art and science in my education, and it was so much fun.”

The course helped cement Gorres’ resolve to complete a double major. And in addition to rigorous courses in both disciplines, he also completed a volunteer management course through the Edyth Bush Institute for Philanthropy & Nonprofit Leadership on campus that has broad-reaching applications.

“Even if I don’t end up managing volunteers, I learned skills about managing people, delegating tasks, and finding meaningful work for different people that I can apply anywhere,” he says.

It might be an understatement to say that Gorres took advantage of every opportunity presented to him during college. He served as a docent for the Rollins Museum of Art (RMA) and was awarded a Goldwater Scholarship, the nation’s most prestigious undergraduate science award. As a United Nations Millennium Fellow, he led an arts program for children with autism that culminated in an exhibition at RMA, and as a Bonner Leader, he spent six weeks in Indonesia working at a sea turtle conservation center.

But he credits his two research projects through Rollins’ Student-Faculty Collaborative Scholarship Program as being the most influential in pursuing his passion, allowing him to explore his divergent interests and further discover how they overlap. He partnered with art history professor Susan Libby to explore new and emerging methodologies for conserving modern artwork and then with biology professor Brendaliz Santiago-Narvaez to identify which specific pigments were used to create the different red paints in an Old Master painting, The Crucifixion with Saint John, the Virgin Mary, and Mary Magdalene. For the latter, Gorres developed the concept proposal, which earned him the Goldwater Scholarship.

“The hands-on experiences I had at Rollins gave me a level of preparedness in terms of my writing skills, my interdisciplinary approach to problem-solving, and my ability to pursue experimental design that has given me an advantage over my peers in graduate school,” he says.

While Rollins provided a constellation of opportunities, the people whose support he garnered along the way helped him make the most of his journey.

Libby gave him the tools to apply a scholarly framework to his interests and deepened his appreciation of art. Santiago-Narvaez helped guide him to microbiology as a discipline and taught him how to be a serious scientist. Biology professor Pamela Brannock showed him that even a failed experiment can provide valuable lessons—and be fun. And museum curator Gisela Carbonell helped shape his curatorial practice.

“I’ve developed relationships with my professors that exceed any of the relationships I’ve had with any of my mentors previously,” says Gorres. “It’s amazing how much the professors at Rollins care about their students and how invested they are in our lives. They really helped me excel.”

Gorres credits the liberal arts education he received at Rollins for giving him the freedom to explore what sparked his interest and take it to the next level and then for preparing him for whatever came next.

“I’m definitely glad I chose Rollins,” he says. “It’s the reason I’m in the Netherlands right now. I wrote about my research project as part of my application to Radboud and earned a full-ride scholarship from the university. I’m really thankful to Rollins for being so open and flexible to making my undergraduate experience as full and purposeful as it could be.”

Rollins Ranks Among Nation’s Best for Athletic and Academic Excellence

The College was recently honored with the NCAA’s Division II Presidents’ Award for Academic Excellence for achieving an academic success rate of 95 percent.