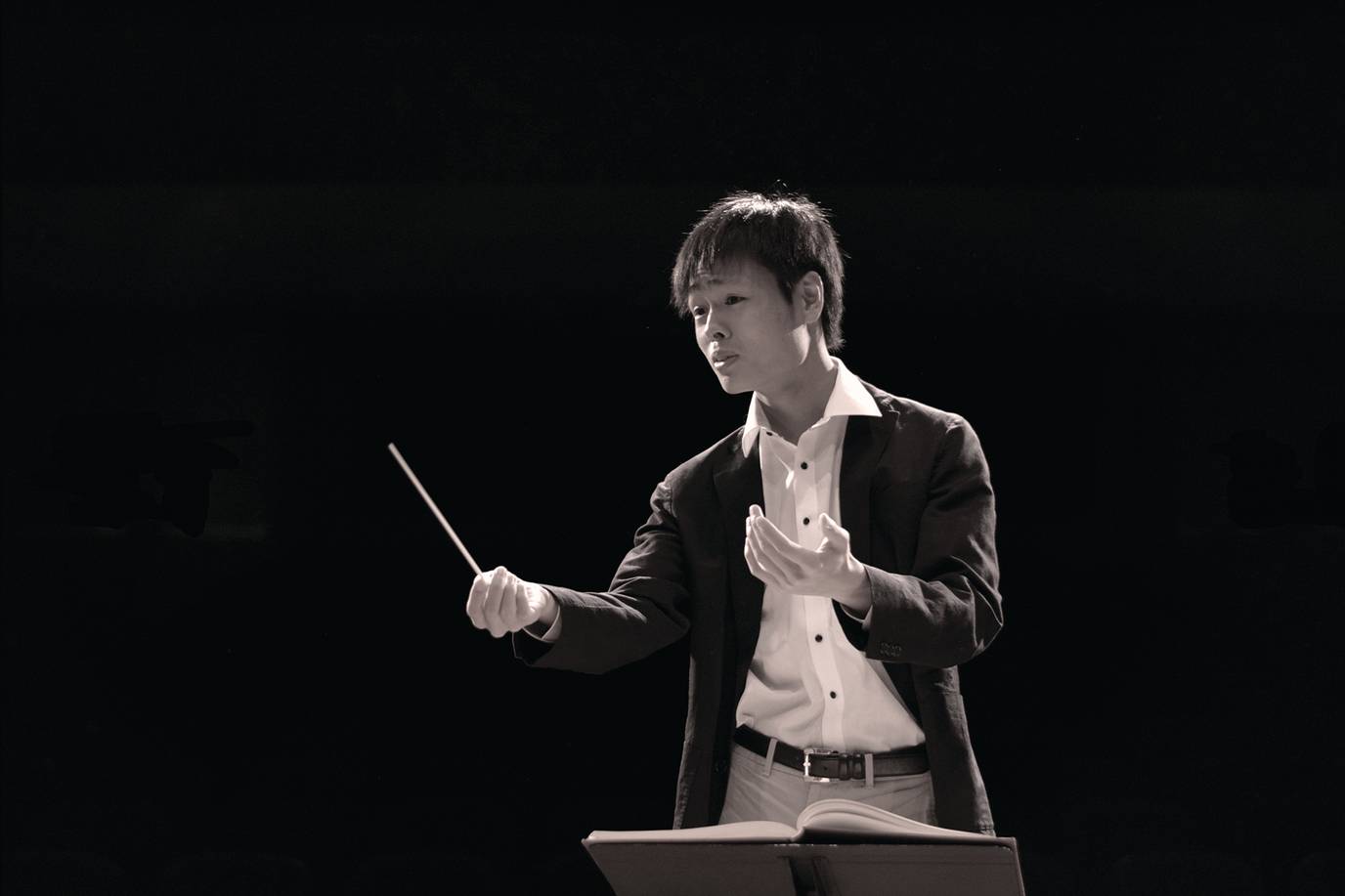 Ten years ago, Ryo Hasegawa ’19 was zipping around racetracks on his Honda NSR50, competing at the highest levels of Japan’s amateur motorcycle circuit. Today, he’s one of America’s most promising young symphony conductors, fresh off completing a master’s of music at Johns Hopkins University’s Peabody Conservatory.

If that high-octane dichotomy seems jarring—trading one well-tuned machine for another—it was a natural transition for Hasegawa, a piano prodigy who grew exhausted by the demands of motorsports.

“The thing I enjoyed the most about racing motorcycles,” he explains, “was the exact same thing I feel when I conduct orchestra: experiencing the passion and energy of all the people I work with to achieve our goal.”

In the Buddhist tradition, such an emotion is called mudita, “a joy that comes from delighting in the joy of others.” There’s no English equivalent—easier to think of it as the opposite of schadenfreude—but Hasegawa’s new life mission is to spread the ancient concept near and far.

Shortly after graduating from Rollins with his music degree, Hasegawa launched the nonprofit Mudita to create a community where diverse art is accessible to any person, in a judgment-free zone.

Collaborating with musicians and artists from around the world, the organization serves as an antidote to what Hasegawa says he experienced growing up: a stereotype in Japan that art is “formal, wealthy, and stiff,” viewed by young people as just a “secondary subject for their entrance exams.”

So, where did Hasegawa find musical enlightenment and begin to break the mold? Nebraska, of all places, where he spent his junior year of high school studying abroad. Captivated by the joy, diversity, and camaraderie he felt in band, choir, and music history classes, Hasegawa decided to attend college in America.

“I wouldn’t be who I am without all the support and friendship and professors who believed in me at Rollins. Gratitude is the biggest feeling I have.”

An advisory service in Japan suggested he pursue a liberal arts degree and provided a list of colleges that offered music majors. Unable to visit Winter Park beforehand, he chose Rollins because of his uplifting phone conversations with music professor Dan Crozier.

Once on campus, that same drive Hasegawa displayed on the racetrack manifested itself in honing his musical chops, from performing with the Bach Festival Society of Winter Park to serving as the principal student conductor in Rollins’ music department.

“The professors trusted me,” he says, “and I was able to perform at my best. One of the highlights was when Dr. John Sinclair [department chair and John M. Tiedke Professor of Music] called me after one semester of taking his basic conducting class and said, ‘Ryo, you’ve got to keep doing this.’ That was the beginning of my conducting career.”

Hasegawa credits Rollins for allowing him a great amount of podium time and offering experiential learning opportunities to build his global network, such as attending the Vienna Summer Music Festival and volunteering as a music instructor at the Vanessa Grant Girls School in Kenya.

Among his many accolades, Hasegawa has performed throughout Europe and Asia, made his American conducting debut with the Charleston Symphony, served as guest assistant conductor for the Baltimore Symphony Orchestra, and earned the Peabody Conservatory’s 2021 Champion of Multiculturalism award.

Now he can add Rollins’ 2022 Recent Alumni Achievement Award, which honors the standout achievements of alumni who graduated within the past 10 years.

“I think back on my time at Rollins and how it shaped me as a person,” says Hasegawa, whose next step is auditioning for doctorate programs. “I wouldn’t be who I am without all the support and friendship and professors who believed in me. Gratitude is the biggest feeling I have.”