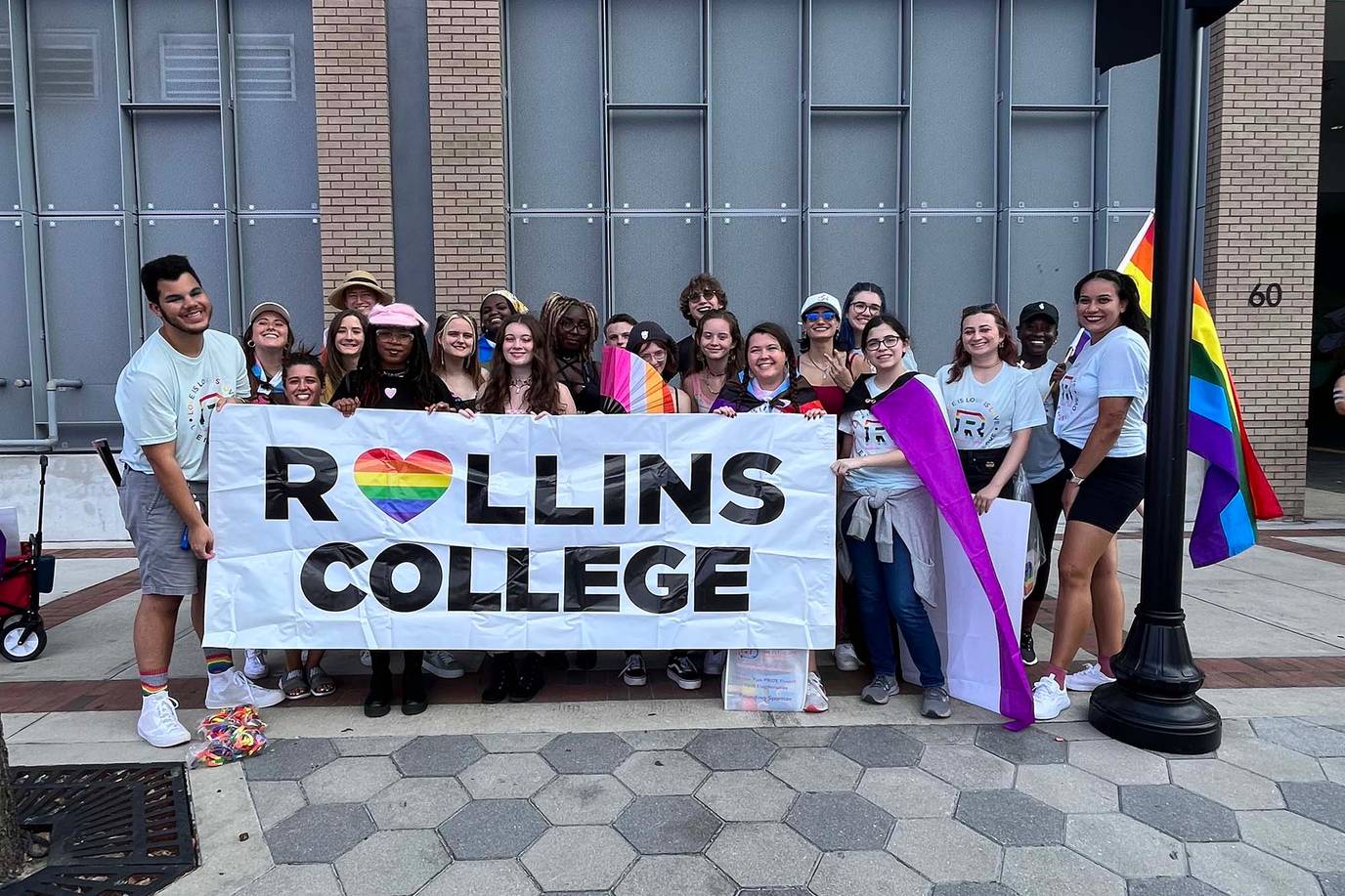 With a renewed sense of energy and plans to increase student support systems, Rollins’ student-run LGBTQ+ organization is embracing their place in the community.

Solomon Brooks ’25 grew up in Winter Park and attended high school just a few minutes away from the Rollins campus. He’d long heard that the College was home to a vibrant community of folks who identified like him—that was one of the reasons he applied to Rollins in the first place. And at the heart of that community was Spectrum, the student-led organization for LGBTQ+ Tars and their allies.

By 2021 when Brooks arrived on campus, though, COVID restrictions had taken a bit of a toll on involvement. But amid a newly launched commitment on Rollins’ part to implement a strategic plan to increase diversity, equity, and inclusion efforts, Brooks and his peers moved on this pivotal moment to reinvigorate Spectrum through a mix of educational programming, fun social events, and community partnerships.

Now as vice president of Spectrum, Brooks is helping the student organization build on its reputation as a thriving, supportive network of LGBTQ+ students and allies across campus. With the aid of the new Center for Inclusion & Belonging and its director, Samantha Vega, the new student leaders are ushering in a new era of advocacy and relationship-building that doesn’t just benefit the queer community but all of Rollins.

“The mission of Spectrum is, first and foremost, to provide a safe space for LGBTQ+ students,” says psychology major and club president Dani Golob ’24. “And this year, we’re opening up new avenues to achieve that goal.”

Golob is no stranger to organizing. As the student coordinator of EMBARK—the College’s cohort-based development program that helps students from marginalized backgrounds acclimate to college life—she’s mentored dozens of peers whose identities fall outside the status quo. Along the way, she’s found that many of her tried-and-true strategies for community building dovetail with Rollins’ core principles—things like mentorship, problem-solving, and service-based learning opportunities. Under her leadership, the Spectrum executive board has plans to reach across campus and partner with as many organizations as they can to facilitate learning opportunities and support strategies for the queer community.

In addition to meeting twice a month, the club is committed to hosting events that focus on queer joy and community, such as game nights, movie screenings, and a drag brunch fundraiser to benefit club interests in the spring. They also host coming-out workshops before each break, with the goal of helping members find ways to broach the topic of their sexuality or gender identity with friends and family.

Next semester, the club’s leadership is kicking off a mentorship program that pairs Spectrum members with representatives from PRISM, Rollins’ resource group for faculty and staff who identify as queer. They’re also working on joining forces with community partners like the LGBT+ Center Orlando and Zebra Coalition as well as other identity-based student organizations such as the Black Student Union and the Latin American Student Association to implement service-based events promoting intersectionality. Additionally, the club is initiating LGBTQ+ allyship training sessions across campus to help allies at Rollins identify specific ways they can take action to make a meaningful impact.

“We’re looking at ways to ensure that our students are supported from the moment they step onto campus,” says Golob. “For instance, we know that each first-year student is required to take a Rollins College Conference (RCC) course, which serves as their introduction to college and helps them adjust to the types of classes they’ll take. Each of these RCC courses includes two peer mentors who serve to guide new students. By providing those peer mentors with allyship training, we’re making sure that queer students will have support from the very beginning without having to seek it out.”

Every October, Orlando celebrates LGBTQ+ History Month by hosting its annual Come Out With Pride parade. And each year, a delegate of Tars representing Spectrum and the Center for Inclusion & Belonging marches in the parade as a way to show their pride and embrace queer joy. This year’s group was nothing short of record-breaking.

“We put out a call for students to march in the parade, and we had an unprecedented response,” says Brooks. “Last year, we had eight students participate. This year, we had more than 30 sign up. It was more than would fit on the bus we’d reserved to shuttle us from campus to the event, so we had to organize carpools for the overflow. It was beautiful. Everyone was wearing their Rollins shirts, and we were all so happy to be there.”

As the members of Spectrum marched through the streets of downtown Orlando, they spotted friends in the crowd and rushed to give them hugs or salute them with an improvised dance move. Brooks said that the assembled first-year students, in particular, coordinated outfits, using their sense of style as a way to express themselves.

“It’s hard to describe how excited we all felt in that moment, surrounded by our community and feeling free to express ourselves outwardly and authentically,” he says. “There truly is strength in numbers, and there’s something so radical about a bunch of folks coming together to support one another like that.”

Golob feels the love too, and she has since she arrived at Rollins. It’s one of the reasons she’s so committed to providing mentorship opportunities to other queer students.

“I was lucky in that I established a support system at Rollins from the very beginning,” she says. “Victoria Teske from the Center for Leadership & Community Engagement and Samantha Vega have been incredible mentors, and they’ve taught me a lot about making sure nobody slips through the cracks. Because of that, I’m constantly looking for ways to connect students with mentors so that nobody leaves Rollins feeling like they didn’t get personalized attention.”

One of Golob’s goals is to partner with Rollins’ Center for Career & Life Planning to host an LGBTQ+ networking event that brings together successful alumni and community leaders to connect with students across industries. She hopes to organize the concept and develop it enough over the next few years so that it outlasts her after graduation.

American studies and theatre double major Kalli Joslin ’19 served as president of Spectrum from 2016 to 2018. She found out about the student organization from her RCC peer mentor and credits the club with helping her make her very first college friends—including the woman who would go on to become her wife, whom Joslin met at her very first Spectrum meeting in 2015.

Now, as a graduate of Georgetown Law School and a current legal fellow at the national nonprofit Americans United for Separation of Church and State, Joslin reflects on her time in Spectrum as essential preparation for her career.

“The experience of working with Rollins faculty, staff, and students planning events, managing budgets, and advocating for our presence on campus really helped me develop professional skills that were useful in my internships, in law school, and now in my full-time work,” says Joslin. “Through the [former] Center for Inclusion & Campus Involvement, I was able to connect with Rollins and Spectrum alumnus Sabrina Kent ’15 at the National LGBT Chamber of Commerce in Washington, D.C. I spoke with Sabrina while I was a student and got the chance to intern for her in D.C. the summer before my senior year, which allowed me to meet some incredible queer professionals doing amazing work and tour the law schools I was applying to.”

Anyone can join Spectrum, regardless of whether you’ve established your identity or are simply exploring facets of it.

Explore how to get involved on campus through #RollinsLife on Instagram.