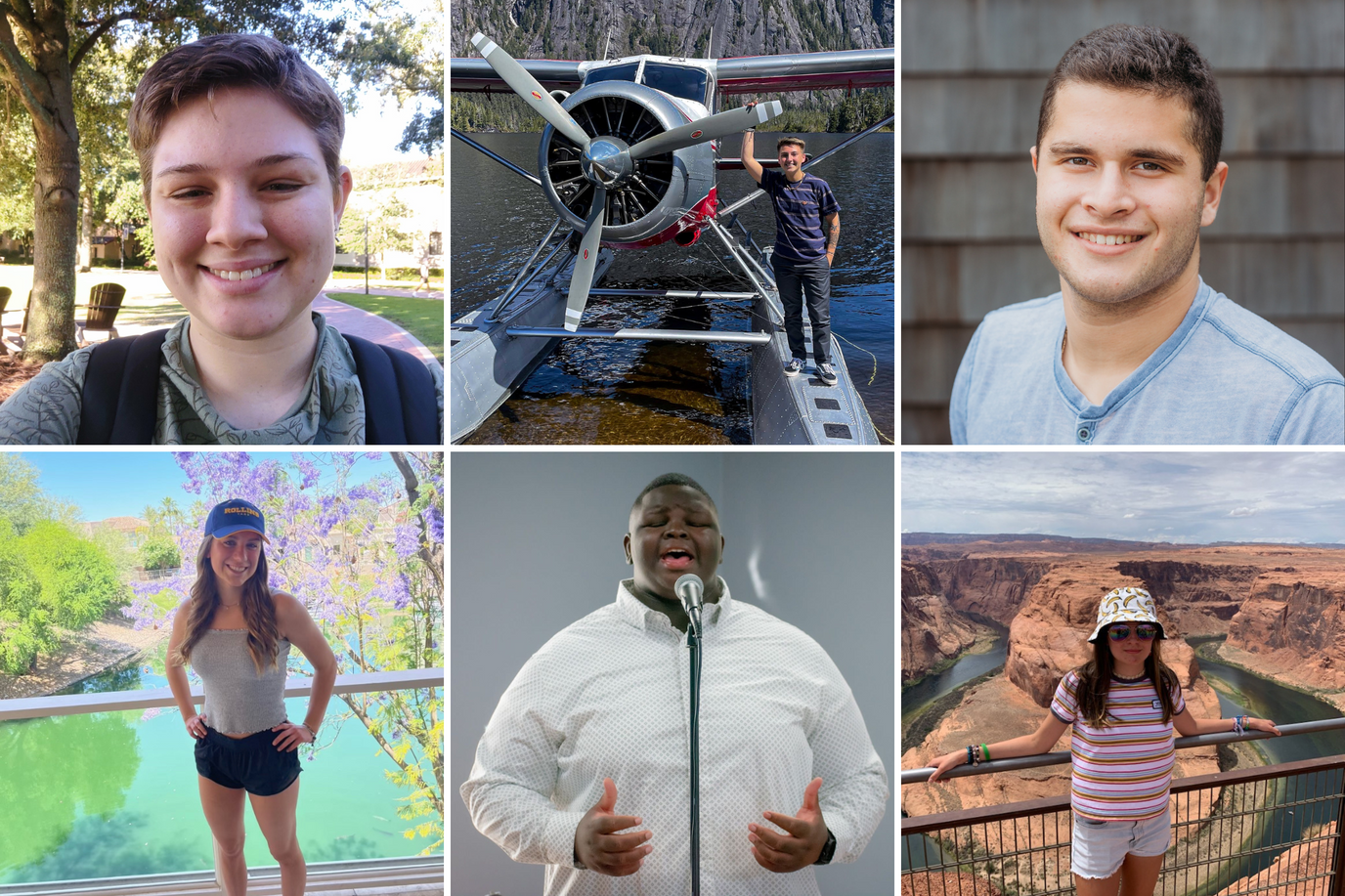 With 630 first-year students, the Class of 2026 is the largest in Rollins’ 137-year history. To celebrate, we’re getting to know a few of our newest Tars as they embark on their #RollinsLife.

It was a milestone moment when Faye Tydlaska, Rollins’ vice president for enrollment management and marketing, officially welcomed the Class of 2026 last month.

Our 735 new faces come from 41 states and 35 countries, traveling an average of 514 miles to get here. Nine percent are citizens of a foreign country, while 35 students hold dual citizenship. Of the incoming class, 93 percent are receiving financial aid, and 15 percent are first-generation college students.

“So, those are the numbers—and they’re great numbers,” said Tydlaska. “But as I saw during move-in and SPARC Day, you don’t look like numbers to me. You look like eager, impressive individuals who we at Rollins are privileged to welcome into our close-knit community.”

We recently caught up with six students from this history-making class to find out why they came to Rollins and what they’re most looking forward to their next four years.

You’ve got to admire the spunk of someone who puts “I am left-handed” as the first item in her bio. But what else would you expect from an extroverted right-brained thinker who’s “incredibly enthusiastic about the arts and always looking to connect with people”?

A graduate of St. Petersburg Collegiate High School, where she simultaneously earned a high school diploma and an associate of arts degree, Sophie Bostick ’26 enjoys singing, working as a spotlight operator, playing video games, and being part of the LGBTQ+ community.

“I wanted a small school where I could build a community and know I’d be supported and valued. Rollins checked all my boxes, and what sealed the deal was the College’s mission and passion for service. I could not be happier with my experience so far.”

Part of Bonner Leaders, a national cohort-based service program, Bostick plans to double major in business management and studio art and minor in music. She can’t wait to participate in women’s vocal jazz ensemble, study abroad for a semester, work on musical theater productions at the Annie, and complete a summer service internship.

During her first days on campus, Bostick discovered the Rollins board game club, joined a Dungeons & Dragons campaign, and found a favorite restaurant, Umi, on Park Avenue.

“I’ve just had the best experience with Rollins’ faculty and staff,” she says, pointing out sociology professor Amy McClure, her Rollins College Conference (RCC) professor, and Kate Juneau, executive sous chef at Rollins’ main dining hall. “They have made me feel accepted and have been so helpful with the start of my Rollins experience.”

It’s a lofty goal. But if anyone can pull it off, it’s Eltavious Johnson ’26: “I want to have at least one meaningful conversation with every first-year student by the end of the first semester.”

An outgoing, charismatic leader who goes by the nickname “Big El,” Johnson knows a thing or two about interacting with the public. In addition to serving as youth speaker of the Bahamas House of Assembly, he’s running for a Senate seat in Rollins’ Student Government Association. A double major in communication and music, Johnson also sings tenor in the Rollins Choir and the Bach Festival Choir, is part of Cru, and hosts an international mix radio show on WPRK, Rollins’ student-run station.

“I’m enjoying every minute of my time here at Rollins,” he says. “I’m looking forward to creating long-lasting relationships and accomplishing the goals that I have hoped for and worked toward as long as I can remember, which is getting that degree.”

Johnson overcame multiple challenges early in life to earn a performing arts scholarship to a prestigious boarding school. There, he quickly grew into leadership positions in the band and on campus, even becoming a recognized name on Nassau’s Global 99.5 FM. Other activities on the island included gigs as a motivational speaker, live musician, and event host.

“I hope to look back on my time at Rollins with a spirit of gratitude and admiration,” he says.

Discovery Channel, take note. The adventures of Mary Scott ’26 would make for a great outdoors reality show. This California native is equally adept living life to the fullest on land, in the ocean, and high among the clouds.

In addition to being an avid camper (Yosemite is among her favorites), Scott is an experienced sailor and SCUBA diver. She’s coming off a gap year, “the best year of my life,” working on tour boats in Alaska and logging flight hours to earn her pilot’s license.

When selecting colleges, Scott originally wanted to focus on schools closer to the ocean. But she decided to visit Rollins anyway, and she’s glad she did.

“Not even halfway through the campus tour, I fell in love,” she says. “I knew this was the place I wanted to be. Out of the many schools I toured in Florida, I felt the most at home at Rollins.”

Scott plans to major in international relations, join the SCUBA Club, study abroad, and do lots of diving. Understandable, then, that jumping into Lake Virginia was one of her first priorities when she got to campus.

“I’ve really enjoyed how welcoming and nice all the professors are,” she says. “Exploring all the restaurants on Park Avenue has also been pretty fun, and discovering that breakfast burger from BurgerFi has changed my life!”

With two parents who served in the Navy, it’s only natural that Sophia Watson ’26 is a budding world traveler with a knack for gravitating toward the waves.

“My favorite thing I’ve done so far while living on campus was spending a weekend in Cocoa Beach with my friends,” she says. “I got to explore the area by paddleboarding to a mangrove island.”

Even before classes began, Watson participated in the First-Year Costa Rica Field Study and spent a weekend on Amelia Island with her RCC cohort. And she’s already signed up to participate in the Everglades Immersion focused on restoration efforts and wildlife protection over fall break.

“It’s on my bucket list to participate in as many traveling opportunities as I can,” she says. “I’m most looking forward to studying abroad. I want to spend a semester in Italy because my parents lived there when they were in the Navy and told me it was the best experience of their lives.”

“I hope to make a lot of memories during my time here at Rollins,” she says. “I want my friends I make in college to be people who continue to be a part of my life in the years after graduation.”

Having attended a small boarding school in Rhode Island for five years, he appreciates Rollins’ small classes and the opportunity to forge personal relationships with professors. Cohen was familiar with Rollins through family ties, as his father graduated in 1995.

“But what really sealed the deal,” he says, “was how welcoming the environment was when I toured and the beautiful campus. I have enjoyed being able to explore Winter Park and connecting with my peer mentors, not just on a mentee level but as friends. I also appreciate how my professors have fully supported the decisions I’ve made in class.”

“I’m looking to make new connections and enjoy my four years at Rollins,” he says. “I hope my future self looks back and says thank you to Rollins for preparing me for the future and life after college.”

Another student whose life revolves around the water is Olivia Prelog ’26, a longtime competitive swimmer who will take on a new sport at Rollins: rowing.

Even though she’s from the desert, Prelog has traveled many times to Satellite Beach to visit family—and she’s quite familiar with Winter Park, as her mom, aunt, and uncle are alumni.

A marine biology major and French minor, Prelog is looking to pursue research programs and internships where she can “jump on the opportunity to help the environment and our marine life here in Florida and around the world.”

Studying abroad in a French-speaking country and possibly joining the military post-graduation are two important life decisions she’s considering. In the meantime, Prelog’s goal is to “make the absolute most of my time and resources every day.”

“I’ve met such great people on campus in my first few weeks,” she says. “From the faculty to my team to fellow classmates, I have found that everyone here is so nice and truly cares about each other’s success. I have felt inspired by my teammates, who have encouraged me to continue my hard work in practice and consistently build others up in the process—something that seems so natural on this campus and in the boathouse.”