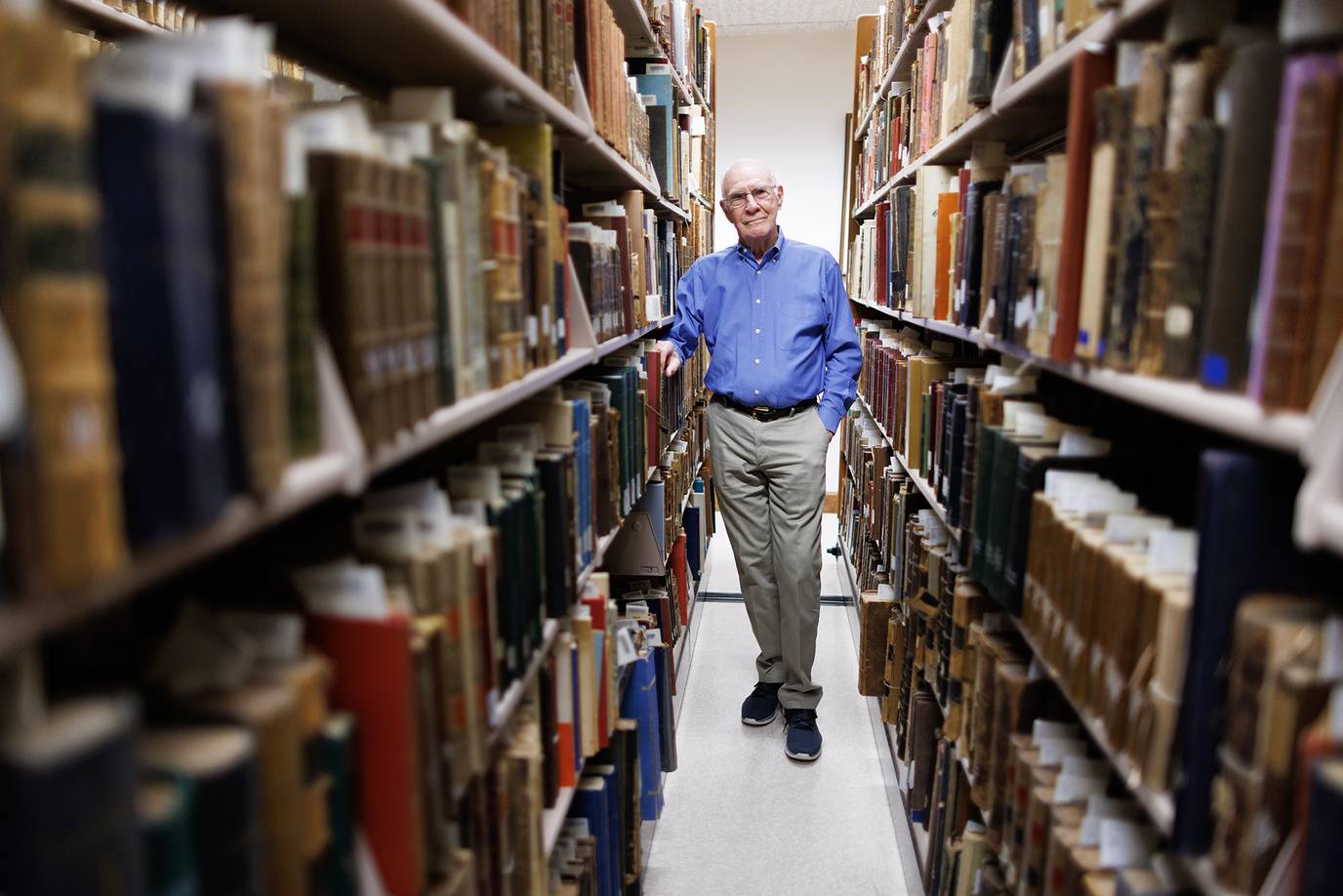 Jack Lane ’06H served his country, chronicled the history of Rollins, and touched countless lives as a professor. Now, his planned gift to the College will help the next generation of students leave their mark.

Emeritus history professor Jack Lane—author of Rollins College Centennial History: A Story of Perseverance—recently set up a planned gift of a life insurance policy to create the Jack Lane History Award Fund, which will support superlative history majors at Rollins. The fund has its origins in a $10,000 life insurance policy given to Lane by the VA when he was drafted into the Korean War.

Fast-forward more than 70 years and interest from that policy will eventually pay off in a way no one could have imagined. The College’s preeminent historian sheds light on why he chose to support Rollins in this meaningful way.

Several years ago, I decided if financially possible I would make a significant contribution to Rollins—to reward students who not only major in history but excel at it.

I had started the VA life insurance policy when I was in the Army, and it came to me that I could serve Rollins by donating a portion of the interest accrued over the years as a way to give back to the College that has given so much to me. That symmetry of serving appealed to me. Plus, I was impressed by former president Hamilton Holt’s phrase in faculty reappointment letters: “I call you to serve Rollins for the coming year.”

I arrived at Rollins in the mid-1960s when one era was ending and another was beginning. Hugh McKean was president, and as I try to show in my historical accounts, he was a product of the Holt era. There was a patrician-like social life with gracious entertainment. As I look back, it had an appealing aspect.

But this was the ’60s and ’70s, and the world of higher education was changing and changing fast, and I wanted Rollins to be part of that change. It was an exciting time, and I loved every minute of it.

Shortly after I came to Rollins, several older faculty members retired, and I was appointed head of the history department with the purpose of rebuilding it. After several fits and starts, I managed to create what was considered one of the College’s best programs.

From that point on, the history department gained a reputation as having high academic standards and quality teaching. So naturally I became and remain very interested in its future and carrying on the tradition of rigor and active learning that I helped start.

When former president Thad Seymour asked me to write the history of the College in 1984 for the centennial, I became aware that even though I had been at Rollins for 20 years, I knew practically nothing about the College’s history, and it made me realize that the community was losing its institutional memory.

That was a serious matter because, as a historian, I understood that without a knowledge of its past, Rollins could not establish its true identity. What I was able to reveal was a rich and meaningful history that gives the present an anchor from which to grow and develop in the 21st century.

I haven’t thought about my gift in terms of leaving a legacy. But now that you mention it, that does appeal to me. I can say that I do want to be remembered in a favorable way.

Among other things, here’s what I hope I have shown—that you can be a scholar and a full-time teacher at the same time. Most importantly, though, I hope I was a good mentor to hundreds of young people so they could lead fulfilling lives. And that I left them with a sense that knowledge of the past is critical to that kind of life.

I am thankful this gift will help carry on that type of scholarly tradition, giving outstanding students the opportunity to embark on their own contributions to historical studies, in whatever field that might be. Because, as William Faulkner observed, ‘The past is never dead. It’s not even past.’

Proceeds can be paid to an individual, estate, charity, or trust. You can name more than one beneficiary and indicate the percentage of proceeds each will receive.

Proceeds paid to a beneficiary are generally exempt from income tax. You can also transfer the ownership to a charity, which could then surrender the policy for cash or borrow against it.

If the policy is no longer needed for its original purpose, you would be putting an idle asset to work. You could fund a large future gift on an installment basis.

As long as the premiums are paid, the benefit to the charity is guaranteed. Insurance proceeds are paid promptly, and they are not subject to the delays and costs of the probate process.

Setting up a planned gift is a beneficial way to support what means the most to you at Rollins.