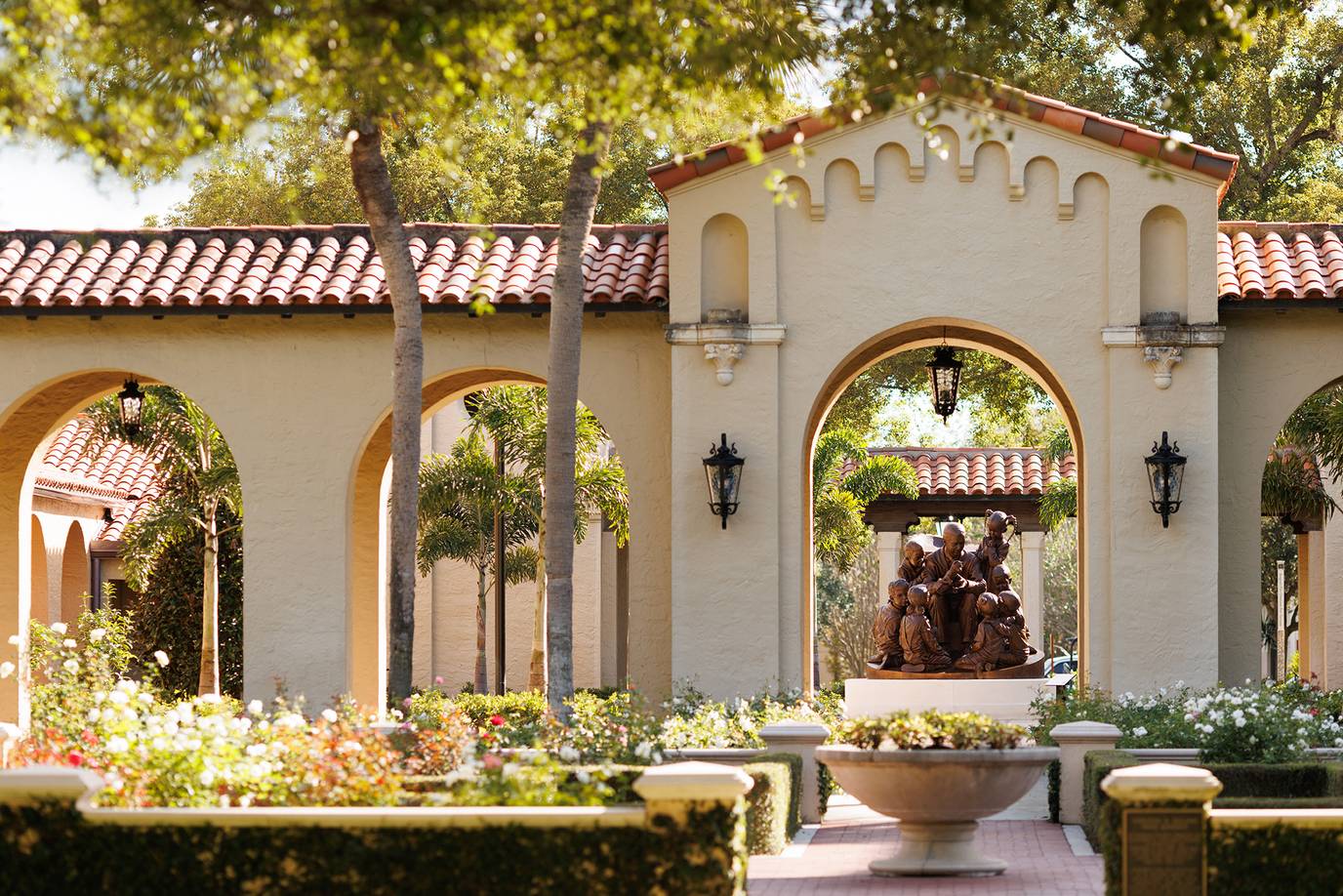 A bronze sculpture honoring Rollins’ most famous alumnus carries his legacy of kindness and service to future generations.

Over 70 years ago, Rollins music major Fred McFeely Rogers ’51 ’74H drew inspiration from a simple marble plaque near Strong Hall that reads “Life is for service.” Those four words helped shape his life and career, and the creator of Mister Rogers’ Neighborhood kept a photo of the plaque in his wallet as a constant reminder.

Today’s college students came of age as Mister Rogers’ time on TV neared its end—the final season aired in 2001, with reruns on PBS through 2008—but the timeless nature of his warm, gentle spirit is embodied in a new sculpture designed to resonate with future generations of Tars.

“I make it a point to walk through the rose garden just to see that sculpture,” says Elise Wendelburg ’23, a double major in music and communication. “We’ve done a lot of music compositions by Mister Rogers, including his song ‘It’s You I Like.’ I think of those lyrics every time I walk by.”

Located between the Annie Russell Theatre and Knowles Memorial Chapel, A Beautiful Day for a Neighbor was created by British sculptor Paul Day, best known for his World War II memorial monuments in London.

Unveiled in October, Day’s masterpiece has received national attention and become a favorite spot for students to reflect on how they too can lead a life dedicated to serving others.

A cast of Rogers’ iconic characters from the Neighborhood of Make-Believe—from King Friday XIII to X the Owl—enliven the sculpture’s eastern side. It’s within this fantastic landscape, says Day, where Mister Rogers dealt with issues fundamental to the human experience: “I wanted to celebrate the brilliance of using fiction to delve into the very heart of the real.”

Depicting Rogers “communicating very deeply on a one-to-one level with children” was important to Day because “everything he did was about celebrating the young lives of children everywhere.” Wearing his signature sweater and sneakers, Rogers is seen captivating his subjects with the hand puppet Daniel Striped Tiger, a shy, gentle tiger who is equal parts timid and brave.

“One of my favorite parts is that on every single shoe it says 143, which was Mister Rogers’ favorite number,” says Wendelburg, “because that’s how many letters are in ‘I love you.’ That’s a nice way of depicting what he stood for—no matter who you are as a person, he really loved you.”

Standing over 7 feet tall and weighing in excess of 3,000 pounds, the sculpture took nearly a year and more than 4,000 hours to complete. “Although it’s not a relief and in perspective, I tilted the face to an angle and created a slightly raised view onto it,” says Day. “There is some distortion to make it sort of slightly separate from the world around it.”

The Mister Rogers sculpture isn’t the only new landmark on campus—a beautifully paved labyrinth walk and meditation garden are now just a few steps away. Together, these elements form a peaceful focal point—a new neighborhood, if you will—designed for reflection, meditation, and community.